In the Pyrenees, as well as other European mountains, studies have indicated that landslides and subsequent flooding have decreased in places where the forest has conquered past grasslands, especially in the highest part of pastures. In some cases, reforestation has demonstrated its usefulness in coping with hydro-climatic extreme events by reducing the hazard intensity.

However, this positive impact is very local, and more importantly, it needs to include the broader implications of the socio-economic impact of land abandonment and downsizing of pastures. Demonstration and monitoring of reforestation in relevant environments are needed to understand the implications of tree species, drainage systems, and agro-pastoral practices.

The Consortium Pyrenees Working Community (CTP) is reaching out to local communities in these vulnerable natural areas to engage them in meaningful dialogue to co-design strategies, funding schemes, monitoring systems, services, and policies related to various NBSs. Proposed demonstrations will be realized in collaboration with the planned work of municipalities and project proposals that receive funding from the Operational Program for Territorial Cooperation Spain-France (POCTEFA) program for 2014-2020.

This program focuses on “Promoting the protection, development and sustainable use of local resources” and “Promoting adaptation to climate change and risk prevention and management.” One of the goals is to propose land use changes as a tool for stabilizing the entire river basin and valleys, with the support of local communities.

Four proposed and approved interventions have been implemented or are under the final phases of implementation in the Pyrenees. These comprise a range of hazards: Erosion, rockfall, debris flows, and snow avalanches.

At this site, landslides and rockfall from a steep, ca. 35 m high slope consisting of loose glacial till, threaten an important road between France and Spain, the A-136 (RD-934 in Freance). There is often fallen rocks and debris on the road, and the visibility of the cars coming from both directions is low due to the curves, and the speed is often high. The location has been identified as a high-risk spot on this road. Increased frequency of heavy rain episodes may increase the hazard. 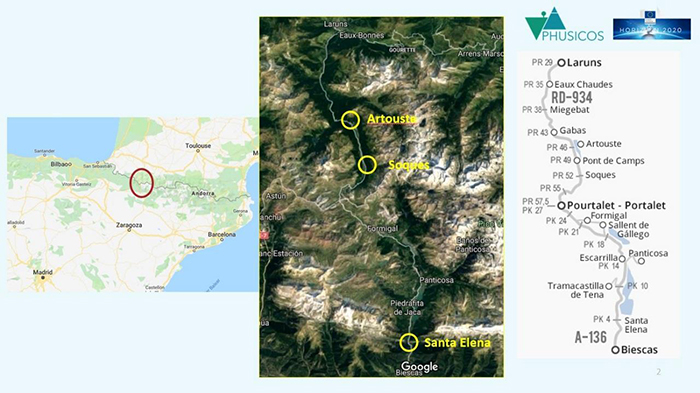 Location of the NBS sites at St. Elena, Spain, and Artouste, France, both defined as high-risk locations along the important trans-national road A-136 / RD-934. The proposed NBS intervention at Socques, also along the same road, was cancelled.

The implemented measures at St. Elena consist of reshaping the slope through terracing techniques, with the establishment of vegetation to stabilize the sediments. The terraces are formed by a 5 m high dry masonry wall at the base, followed by 10 terraces constructed by logs. The log constructions are in the form of timber gabions, filled with the local sediment, and with a 10 cm layer of organic soil on top for planting of bush vegetation on the terraces. All plants to be used are local, with preference for species with deep root systems. In addition, ca. 1 m deep holes are filled with organic soil at 3 m intervals for the planting of larger trees. The width of the construction is 32 m at the base and narrows off to ca. 20 m at the upper, 10th terrace.

The implemented measures at St. Elena are expected to provide several co-benefits: 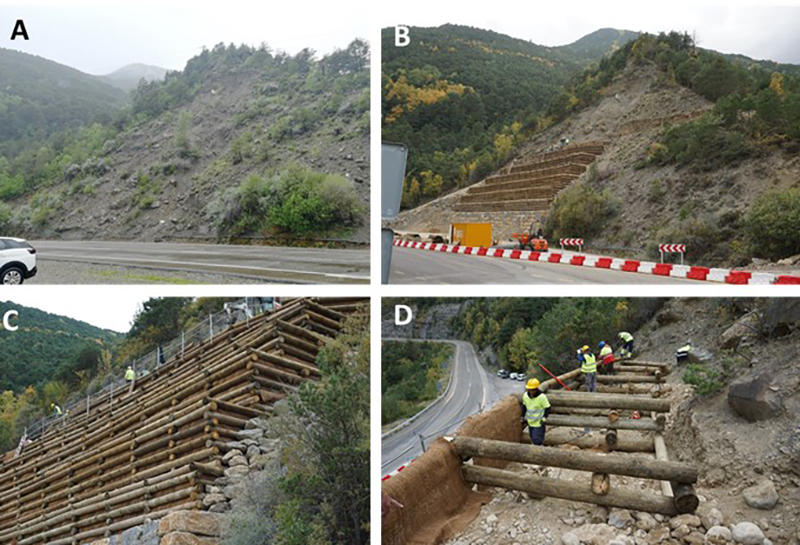 A) The till slope at St. Elena in June 2019. Loose blocks often hit the road, and small landslides often occur during heavy rain, exposing more blocks to threaten the road. B) The St. Elena slope on 11. October 2022. The road has been temporarily moved. The 7th of the ten planned terraces are being built. C) Close-up of the wooden terraces. D) Construction of the wooden gabions supporting the terraces. Notice the use of coconut mats on the outer parts of the gabions.

At this site, the road, RD-934, bends around a sharp hairpin that turns below a steep, forested slope. The hazard at Artouste is caused by rockfall sourced from exposed rock ledges and loose blocks resting on the till surface in the steep slope. The forest has a protective effect for smaller blocks, but rocks often hit the road. In the worst case, the same rockfall event may hit the road three times. In 2013, a fatal accident occurred when a passing car was hit by a falling rock.

Overview of the rock fall area at Artouste (left) and part of the exposed road (right). Falling rocks come from the slope above the road, cut, and hit the road with high energy.

The NBS measures currently being implemented consist of wooden structures designed to prevent the release of rocks and to stop released rocks before they reach too high a velocity. All release zones and individual loose blocks have been mapped and marked with flags indicating the type of measure to be implemented.

As an immediate action, the municipality has mounted rockfall nets in one steep section above the road. This will provide a good site for comparison between the effect of the NBS interventions and the traditional ‘grey’ structures (the nets) over time.

A) Newly established rock fall nets in one slope section at Artouste. B) Santiago Fabregas (EGTC Pireneos) showing a loose boulder, which is flagged to indicate the type of protective structure to be implemented. C) Rock ledge, a potential rock fall source, flagged for NBS protective measures.

The structures should be constructed close to the potential release areas and immediately below. Only logs from the region are used, and the measures are to be combined with the preservation and proper maintenance of the existing forest.

An additional action related to the Artouste site is the establishment of test facilities for wooden protective structures, in which different tree types and structures will be tested. These facilities comprise a laboratory for small-scale tests in Jaca, Spain, and a full-scale test site on a slope ca. 10 km north of Artouste, both of which will be active long beyond the PHUSICOS project period.

As for other NBS, the interventions at Artouste are expected to provide several co-benefits in addition to the risk reduction:

The interventions are also assumed to have a sizeable upscaling potential, in particular when optimized through the experimental activities in the laboratory and full-scale test site.

The village of Barèges, an important tourist destination, has been hit by snow avalanches from the mountainside to the north of the village several times. The village, which is part of the Grand Tourmalet ski destination and also has warm health baths, was evacuated because of avalanche hazards as late as 2013 and 2015.

There are several avalanche paths on the valley side, and a number of existing measures exist in the form of fences, stone- and concrete barriers, and other structures, some as old as the 19th century. These do function, but in extreme winters, the existing fences are buried in snow, and avalanches can be released from the snowpack above the fences. This was the situation during the last avalanche that reached the village. In addition, they require extensive maintenance, which must be carried out on foot and is, therefore, very laborious.

Left: The Bastan Valley, with Barèges in the red circle.
Right: The release area of the snow avalanche path Midaou where the afforestation is taking place (red circle).

The implemented NBS measure consists of planted trees of 5 different species, all of which should be adapted to the climate and elevation (1800-2200 m asl.) of the site. The trees are meant to withstand prognosed climate change and to be robust enough not to need extensive maintenance. The plants are either protected by 88 newly built wooden tripods, by existing grey structures, or by existing groups of trees. The plants are planted in polygons, downslope of the protective structure. There are 150 polygons, with 30-50 plants in each polygon.

About 5000 trees were planted over four years, but with the exact age of plants in each polygon. A certain loss of plants is expected and even required since the plants in each collection (polygon) are planted too dense for the significant growth of all. The wooden tripods are also meant to protect against avalanche release as long as they are standing and until the planted trees grow high enough and develop a stem thickness to act as adequate protection against avalanche release within ca. 10-15 years.

The NBS interventions at the Capet Forest have several co-benefits: 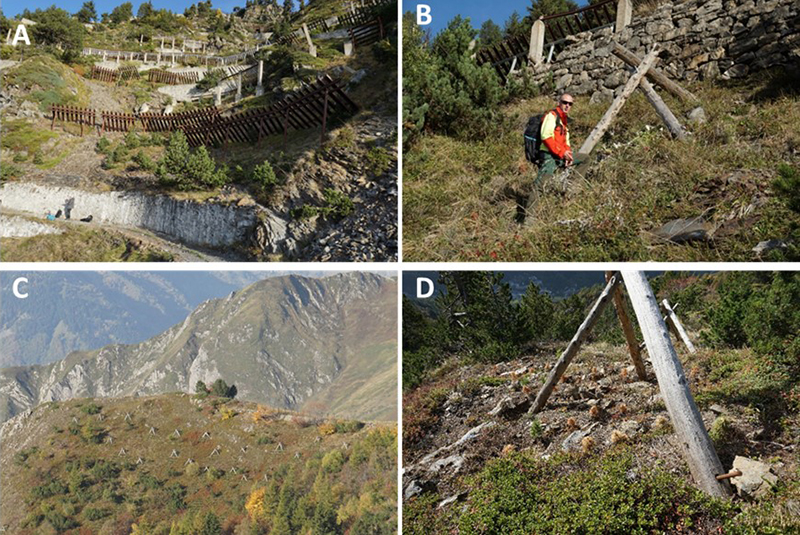 A) ‘Grey’ structures in the slope. B) ONF’s Laurent Lespine by one of the tripods for protection of new plants. C) Tripods protecting plants in a more barren part of the avalanche release area. Natural forests and old grey structures can be seen in the foreground. D) Example of plant collection where most plants have died, but still, enough for the purpose seem to survive.

The village of Erill-la-Vall in the Spanish Pyrenees is heavily affected by debris flow problems, where sediments are fed from tributary creeks and into a main debris flow channel leading to the village. The source area consists of thick (>50 m) deposits of glacial till. The annual precipitation of the area is about 1100 mm/year, mainly in the fall and spring. However, intensive showers in July-August seem to have the worst effect on the debris flow potential.

The implemented measures consist of a combination of revegetation to limit erosion and of terraces constructed by dry stone walls and timber to minimize energy in the creeks and to avoid further lowering of the erosional level, all to reduce the feeding of sediments to the main debris flow channel, and thereby reduce the hazard posed to the village. The terraces are constructed in the lower parts of the steepest part of the two main gullies and are to be covered with organic soil and planted with local vegetation: grass, bushes, and trees. Soil and turf from the area are used, and natural fertilizers from local grazing animals are used on the terraces. About 2500 plants will be used, all local species. The terraces are constructed starting from below and as high up as possible with an excavator.

The site has been instrumentally monitored since 2007, including a weather station, micro-seismic network, and borehole through the entire till section behind the scarp, instrumented with piezometers. Hence, there are abundant available data and a good understanding of the relationship between precipitation and instability events.

Left: The terraces constructed as part of PHUSICOS. These are constructed both of timber and of large local stones.
Right: Close-up of one of the terraces, with grass taken directly from one of the local pastures. All terraces will be planted with grass and other local bushes and trees.

Co-benefits expected from the interventions comprise: