The Serchio River Basin is defined as a basin of national interest according to Italian law. It has been identified as a ‘river basin district’ for implementing the EU’s Water Framework Directive. The unique combination of challenges that are present includes extreme drought and flooding, seismic risk as well as water pollution.

The “Autorita di Bacino Distrettuale dell’Appennino Settentrionale” (ADBS) is the authority that leads efforts to address these risks in a portion of the river basin, Massaciuccoli Lake, through the design and implementation of a pipeline and diversion channel which has been funded by the Ministry of the Environment and the Protection of the Territory and the Sea. The water supply through the diversion channel has been coupled with implementing several NBS techniques to mitigate the effects of climate change and simultaneously increase biodiversity and improve water quality.

The main problem to solve with the proposed and implemented NBS measures is the runoff of soil and pollutants from the farmland to irrigation canals and from there to the nearby Lake Massaciuccoli on the Tuscan coast. In addition, the measures will have flood reduction potential.

The authority has collaborated with stakeholders (local farmers and other organizations) to implement these NBSs, including the maintenance and monitoring plans, and explore planning strategies with the overall goal of developing an ecosystem-based management approach for hydrogeological risk reduction in the whole area of the Massaciuccoli Lake.

All proposed measures are implemented, and a number of monitoring activities have been initiated. Several chemical indicators are monitored with installed probes in addition to the water level and turbidity of the surface water in the canals. 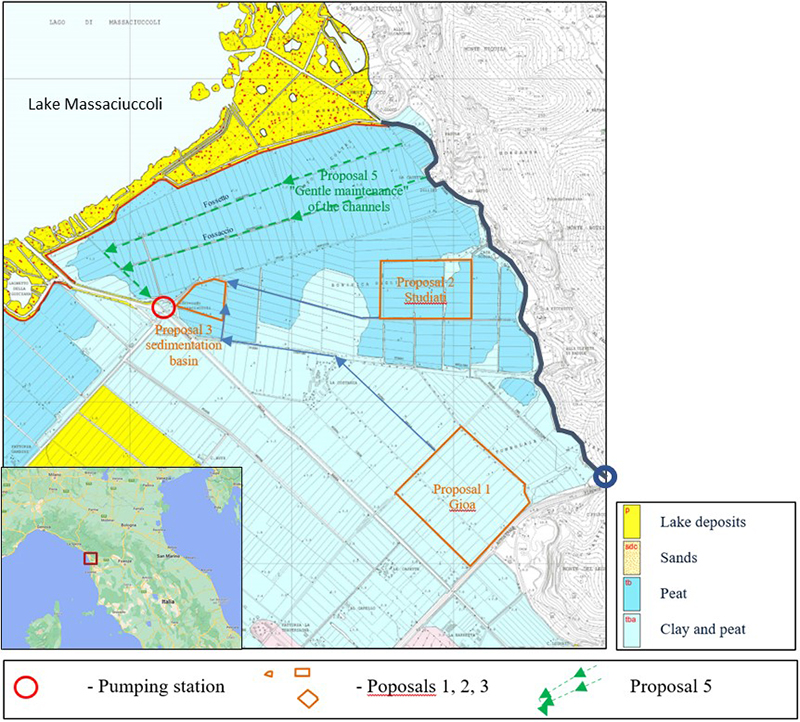 Overview of the surficial geology and proposed interventions at Lake Massaciuccoli, Italy. The pumping station is an existing infrastructure and not part of PHUSICOS. Proposals 1 & 2 are the buffer strips, whereas proposals 3 and 5 are the sedimentation basin and the canal modifications, respectively. The heavy blue line in the northeast is the Fossa Nuova Canal, through which the Water is led from the Serchio river via a pipeline with an outlet at the blue circle.

The design of the implemented buffer strips and the selection of plants has been made in close cooperation with the University of Pisa, Italy. The width of the strips was a matter of discussion, and the resulting 3 m was a compromise between the scientific experience and the farmers’ willingness to provide land.

The agreement was reached through an active Living Lab process. In addition to preventing runoff of pollutants from the farmland, the strips will also prevent runoff of sediments and thereby clog the channels, which also serve as a flood mitigation measure.

The implemented sedimentation basin forms an essential third element in the NBS measures to reduce the runoff of sediments and pollutants from the Studiati and Gioia fields. The Basin is vegetated with water plants selected for optimal uptake of pollutants (nutrients and pesticides). It has access to machinery for maintenance, including the outtake of trapped sediments after flooding events.

Photos of the sedimentation basin immediately after completion. (Photos: ADBS)

A final implemented NBS intervention for the area around Lake Massaciuccoli has been to modify the shape (cross-profile) of two important canals to increase their hydraulic capacity and thereby increase their flood-mitigating capacity. The modifications also included planting bank vegetation, which will slow down the water flow, reduce bank erosion, and can absorb pollutants.

The canals have been modified by enlarging the original trapezoidal cross section by constructing small ‘floodplains’ along the banks, increasing the practical section of the canals during flooding events. Furthermore, the modified cross-section provides a better environment for the bank vegetation, with carefully selected species. 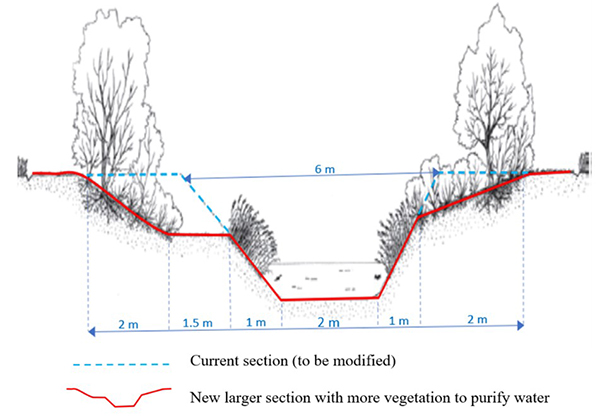 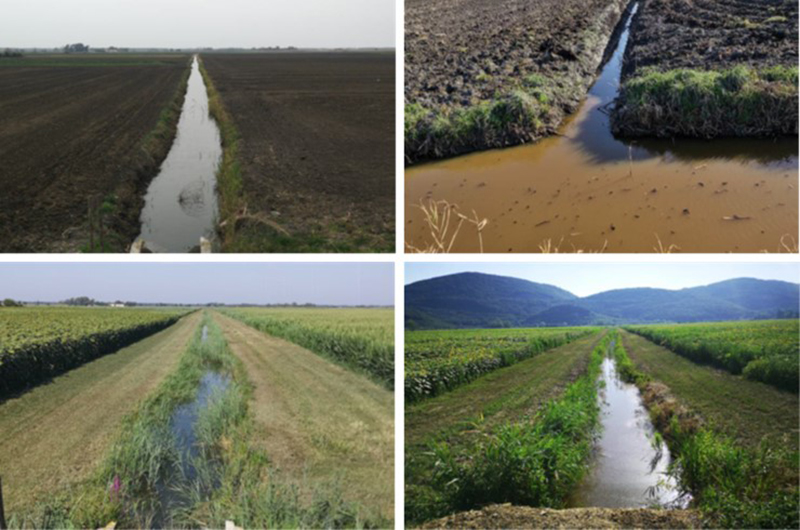 The Fosetto (left) and Fossacio (right) canals before (upper) and after (lower) modification. (Photos: ADBS)

The potential for upscaling is high in this area, and it is hoped that this will foster the implementation of a territorial management strategy for overcoming the challenging issues associated with runoff from the farmland and mitigating floods. The planned diversion channel/pipeline (not part of PHUSICOS) will also reduce the problems related to droughts.

Over the following years, ADBS will focus on upscaling these solutions as best practices to other regions in Italy.

In addition to the main goal of reducing flood risk and runoff of sediments and pollutants, the measures have a range of co-benefits, such as: