Kaunertal Valley in western Austria is experiencing glacier retreat, and the southern part of the valley, the ‘Gepatschferner’ glacier, is one of the fastest melting glaciers in Austria. This glacier retreat leaves unconsolidated sediments in steep lateral moraines exposed to erosion and subsequently rock fall, debris flows, and shallow landslides decreasing the slope stability in the proglacial.

These sediment dynamics adversely affect essential infrastructure such as roads, settlements, and the Gepatsch reservoir securing electricity availability for the region. The Kaunertal pro glacial area will serve as a concept case where climatic changes, such as the increase in frequency and severity of extreme events, impose strong threats to the region. In an interdisciplinary effort between geomorphologists and ecologists, the stabilizing effect of vegetation and the growth-promoting effects of bacteria to enhance plant traits that most strongly contribute to slope stability are demonstrated.

Local companies that established methods to revegetate steep slopes with ‘hydro seeding’ or ‘spray cover’ grasses on mountain pastures after the skiing season are valuable partners in evaluating the feasibility of and implementing the solution on the steep lateral moraines in the Kaunertal.

Laboratory experiments (left) and vegetation plots (right) to test bacteria-assisted vegetation cover to stabilise slope in areas of glacier retreat above the timberline. 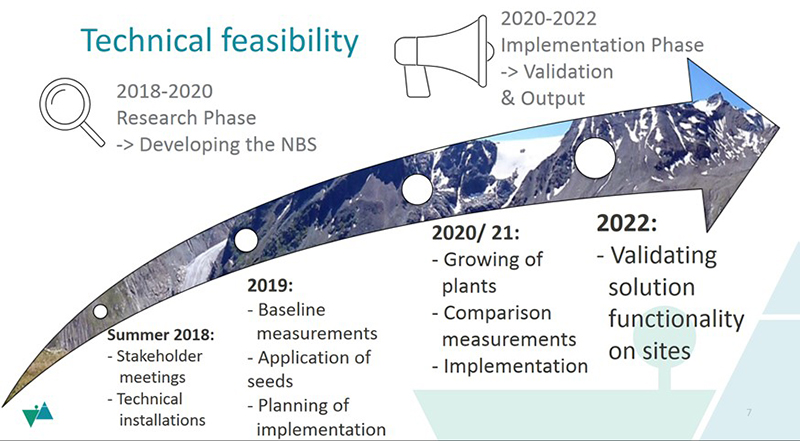 The work has been performed in the laboratory and a number of test plots at various locations in the Kaunertal Valley. Each installation had three 2x3m plots; a control plot with nothing done, a plot treated with plant seeds only, and a third plot with a mixture of seeds and microorganisms. Runoff has been monitored from all plots. 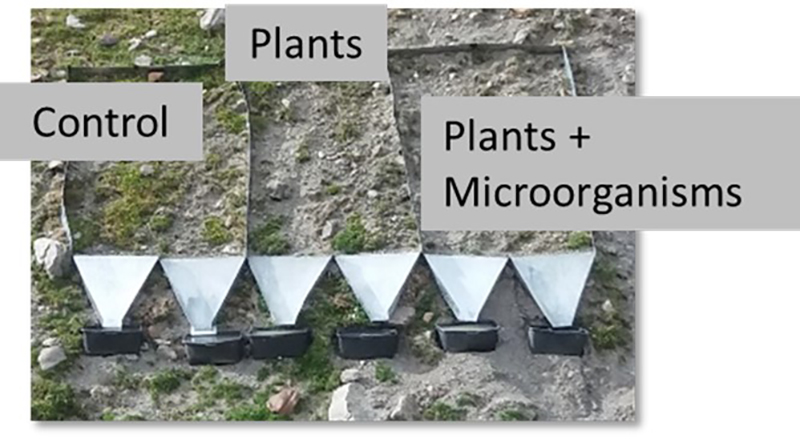 Example of one of the 20 test fields in which the erosion reduction was tested.

Implementation at a larger scale was delayed mainly due to the Covid-19 pandemic, but also other problems, such as difficulties getting enough seeds, have affected the project’s progress. However, implementation at different sites, totaling an area of ca. 10.000 m2, has now been done, but results will not be available until the growth season of 2023.

One of the sites where the seed-bacteria mixtures are deployed at a larger scale (Photo: Sabine Kraushaar).

The Kaunertal concept case group has also had extensive dissemination and outreach activity, aiming at all groups and levels in both the scientific and civil society, from school children to professors. This includes films, e-learning modules, newsletters, lectures and excursions, exhibitions, etc.

Close contact and interaction with the local community have been maintained throughout the project, which has led to enthusiasm and a sense of ownership of the project, as well as increased knowledge of the possibilities of NBS.